Clayton’s oldest and continuously operated business, now known as The Clayton Club Saloon, is located on Main Street (6096 Main Street, Clayton, California). It was built by Jacob (Jake) Rhine circa 1873; Jake operated a Hotel/Saloon and ice cream parlor at the corner of Main and Morris Streets from 1874 – 1898. In 1898, the saloon was called The National Saloon. This popular saloon has continuously served the public and survived Prohibition, the Great Depression, several ownerships and name changes.

Inside National Saloon (circa 1903) 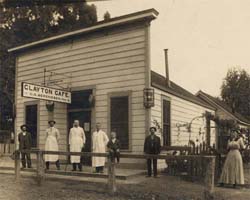 On October 6, 2002, a historical marker was dedicated in front of the Clayton Club Saloon. The bronze marker, which is located on Main Street in front of the Clayton Club, is mounted on a monument constructed of stones from the Mother Lode country. It was constructed by the Joaquin Murrieta Chapter 13, E Clampus Vitus, under the direction of X Noble Grand Humbug Jon Wilson of Concord.

BRENTWOOD — Anna (Berendsen) Berkheimer has lived in Brentwood since 1981, but Clayton will always be her home. Berkheimer was born in Clayton, approximately 22 miles west of Brentwood in 1913, in a building that is known as the Clayton Club, a country and western bar. Her father had the building shipped down river from San Francisco to Martinez and transported to Clayton. The building was used as a saloon, a restaurant and the family’s home until Prohibition in 1920.

“Before Prohibition my father ran the saloon and mother took care of the dining room. If the women wanted a drink, their husbands would bring it to them in the dining room because at that time it was considered improper for women to enter the saloon. The names for women who did go into the saloon weren’t very nice,” Berkheimer said. Once Prohibition took effect, Berkheimer’s father opened picnic grounds along Marsh Creek known as Indian Village.

Berkheimer was the daughter of Carl Berendsen, who emigrated to the United States from Denmark at the age of 17. Her mother’s parents were also from Denmark. “My father spoke seven languages but he didn’t allow a foreign language spoke in the house except when he and my mother didn’t want us children to under stand what they were discussing. He said he came to America to be an American citizen and we should speak English,” she said. Berkheimer had four brothers and three sisters and all of them kept busy as children playing throughout the nearby hills. “There weren’t many homes around, so we played a lot of games with each other. We’d ride on pieces of cardboard down the hillside and played kick-the-can a lot,” she said. “We’d also put a board between two wagon wheels, tie a rope on the wheels, and ride on the board all the way down the hill. If we wouldn’t jump off or steer the thing right we would have ran right into a barbed wire fence,” she said.

In 1926 her father drowned in Marsh Creek after driving his vehicle off the bridge and her mother subsequently married Frank Schwendel, who was born and raised in the Marsh Creek area. Schwendel owned 1,200 acres between Brentwood and Clayton and Berkheimer assisted with many of the chores on the ranch. “I learned how to milk cows, drive a tractor, and quite a few other things, but I really enjoyed it even though it was hard work,” she said.

Berkheimer recalled her childhood as a time of family unity. “Until I was 18 years old, any time I went out on a date I had a chaperone, usually one of my older brothers. And, when you went to a dance you stayed right there inside until it was over and then you went straight home,” she said. “Today families go in all directions. The parents go one way and do their thing while each of the children do what they please. A lot  of families don’t enjoy the togetherness of going on activities and playing games together,” she said.

Berkheimer recently visited the building that once served as the Berendsen home, proudly pointing out a picture of her father with a few friendly patrons that hang