Skip to content
On February 4, 1884, L. C. Wittenmeyer, Contra Costa County Clerk, filed a petition of Robert Hastie and others for a local jail at Clayton.

To the Hon. Board of Supervisors of Contra Costa County

The undersigned Residents and Taxpayers of Township four Contra Costa County hereby respectfully represent to your Honorable Board the necessity of having a Jail in the town of Clayton, for the temporary keeping of criminals arrested. Said town of Clayton is remote from our county seat, and the arresting officer is at present obliged to take the prisoner to Martinez causing inconvenience and extra expenses, besides delays.

Your petitioners respectfully ask your Honorable Board to allow a sum sufficient for the creation of a Jail here.

On February 21, 1887, A. Lobree, Constable, filed a petition for at least two pairs of Blankets and a water Bucket for the Jail in Clayton.
In the year 1903 Mrs. Kirkwood Clare took a photo that showed our jail located on Oak Street across from the old Endeavor Hall near the school bridge. Photos from a Trette family album and the Louis Stein Collection also show the jail in this location. 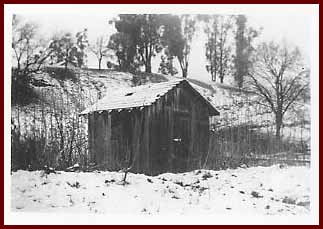 In the 1940’s Constable Chapman sold the “no longer in use” jail to OaK Street property owner Tony Gomez. He added an extension and used it as the family garage. Later, this land was purchased by the City of Clayton and the jail was given to the Clayton Historical Society. It was moved to its current site at the Clayton Museum in 1976.

Jail & Outhouse – Pape Property (1970s)
To return the jail to its original design, the Gomez garage addition was removed. A new door was fabricated with a hasp and bolt saved by Will Frank from a discarded door at Clayton’s old Mt. Diablo Winery. A concrete foundation was laid, the roof replaced, electricity installed. 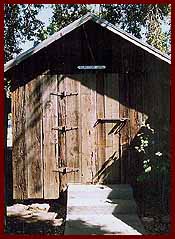 Clayton Jail | Present Location at the Clayton Museum
The jail was opened to the public October 8, 1995, at a reception for visitors from Buxworth, England, the birthplace of Clayton City founder, Joel Clayton.
Crime and Punishment
During this period of time the most common crime was Debt.  This was followed by Battery, Larceny, Drunk, Disturbing the Peace, Battery and Threat to Kill, Malicious Mischief, Unsound Mind, Abusive and Vulgar Language, Indecent Exposure, Grand Larceny, Vagrancy, Slander, Threats, Highway Robbery, Murder, Cruelty to Animals, Desertion, Damage of Property, Burglary, Contempt of Court, and Arson.
The old term “thirty days or thirty dollars” proves to be true in most of the cases documented in the Clayton Justice of Peace Ledger 1893-1921.
Constable Charles Chapman
vs.
Charles Johnson
September 22, 1893
The Charge: “Wilfully and maliciously driving his horse at a fast and un- usual rate of speed on the public streets of the Town of Clayton.” The Judge’s decision, “Wherefore it is by this court ordered and adjudged as a punishment for the offence of fast- driving on the streets of Clayton… that you, the said Defendant—do pay a fine of $30.00 or be imprisoned in the County Jail…until the fine be duly satisfied in the proportion of one day’s imprisonment for every dollar of the fine.”