When James Marshall discovered gold in 1848 in Coloma, men and women swarmed to California by the tens of thousands seeking wealth and a new life in the West. One such prospector was Joel Clayton, who emigrated from a mining area of Derbyshire, England and settled in the Clayton Valley area around 1855.

The early discoveries of gold, quicksilver, copper ore and lime deposits on the slopes of Mt. Diablo never developed into a viable industry. Although it was gold that brought prospectors and miners to California, it was coal that changed the landscape and the socio-economic make-up of the area around Mt. Diablo.

By 1860, most of the placer gold was recovered and companies were organized to finance the large expenditures necessary for the development of California’s hard-rock mining industry. Ore cars, stamp mills, mine rails, crushers, pumps, and hundreds of other items were needed. Foundries in San Francisco, Sacramento and Stockton were operating twenty-four hours a day to turn out the massive equipment needed for the gold and silver mining industry. Expensive imported coal ($35/ton) provided the energy that was required to fuel these huge foundries. In 1860, San Francisco foundries burned 77,635 tons of coal; one foundry had the capacity to melt down over 35 tons of metal. 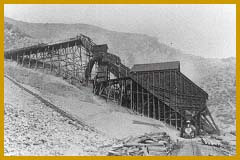 It was the discovery in 1858 of a coal outcrop by W.C. Israel six miles south of Antioch and in 1859 of the Black Diamond Vein of coal by Francis Somers and James T. Cruikshank that created a furor. Coal found so close to San Francisco was vital to the growth of the California economy. It provided a cheap readily available source of the energy needed to fuel the foundries, mills, ferries, steamers and developing industries. By 1867, the price of coal had been reduced to about $15 a ton.

Because of the demand for coal several mining companies were formed attracting a large number of miners to the locality. English and Welsh miners and Americans who had gained experience in Pennsylvania found their way to the Black Diamond coal mines. Italians, Germans and Chinese opened businesses in the burgeoning towns. At first single men came for work, later bringing their families when they were sure the mines would be operating on a long-term basis. Noah Norton opened the Black Diamond Mine and in 1861 founded the town of Nortonville, a melting pot of diverse cultures.

By 1860, there were six miles of mines stretching between the towns of Somersville and Nortonville, and Judsonville and Stewartville. Clayton, only a few miles from the activity of the Mt. Diablo Coalfield, responded immediately to the demand for services and supplies. By 1861, Clayton had become the hub of activities in the area. With miners walking over the hills for supplies and entertainment, Clayton became a bustling community with hotels, a general store, school, tavern and two churches. Roaring tumultuous clamor filled the streets of Clayton as hordes of prospectors, miners and settlers poured into the valley. Food, mining supplies, and land were in big demand, and prices soared. By 1868, the early “boom” period of the Coalfield, Clayton, one of the largest cities in Contra Costa County, had a population of 900. 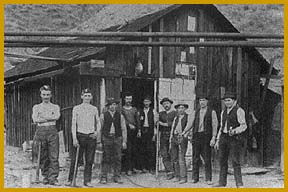 Four million tons of coal were extracted during the brief history of coal mining in the Mt. Diablo Coalfield. The soft bituminous coal was of low quality. By 1902, the mining costs, competition from high quality Washington coal, the advent of oil as an industrial power source and affordable available transportation drove most of the mines out of business. Many of the miners departed for Washington and Oregon where the hard coal, anthracite, was being mined. Nortonville and Somersville became “ghost towns” overnight and Clayton became a quiet wheat-growing, ranching community. Many of the people who had come seeking wealth in the coal fields stayed and became farmers, ranchers and merchants. During the 1890s, the Clayton area experienced an economic slump due to the demise of local coal mining and a drop in wheat production.

1905 saw the end of coal mining in the area. In 1922, silica sand mining began in Nortonville and at the site of the old Pittsburg Mine in Somersville. The sand was used in the making of glass at the Hazel-Atlas Glass Company in Oakland and by the Columbia Steel Company in Pittsburg for steel production. Mining operations in what had been the biggest coal mining operation in California closed down for good in 1949.