Near the confluence of Mitchell and Mount Diablo Creeks, Joel Clayton planted 28 acres with a variety of grapes, and built a small winery which later became known as the “sherry house” for distilling brandy and sherry. His vineyards thrived, and other settlers followed Clayton’s example because Clayton grapes produced good wines which commanded high prices.

After Joel Clayton died in 1872, his heirs sold the vineyard and sherry house, which encompassed 43 acres, to Paul De Martini. Paul De Martini was born in Genoa, Italy, in 1844. He came to the U.S. in 1861 and moved to Concord, California in 1865. He had a vegetable garden on the Galindo property in Concord. Later he moved to the coal mining community of Nortonville, where he operated a boarding house for two years. He then moved to Clayton, where he bought approximately 44 acres from Joel Clayton, and planted his vineyard.

This occurred during a period of tremendous expansion of both vineyards and wineries in the Clayton area and the rise of Clayton to pre-eminence among Contra Costa County’s grape growing regions. To take advantage of this growth, De Martini expanded the vineyards and, in 1885, hired Mr. Dragovich, an Austrian stonemason, to direct the building of the large stone winery south of the sherry house. The winery sits atop a small knoll across Clayton Road from Mt. Diablo Elementary School, on about 11 acres of the original 44 of the De Martini estate. John Cavagnaro was the stonecutter, and one of Paul De Martini’s three sons, Walter Jr., worked with the men as a hod carrier. About 6 men built the large winery, completing it in 1885. The new winery allowed De Martini to expand production, pressing grapes from his own 20 planted acres, as well as some 150 to 200 tons he purchased from neighboring growers. Once the winery began producing, De Martini made twice-a-week wine wagon runs into east Contra Costa County’s coal mining regions. The De Martini winery produced prize-winning wines, winning first place for port and sherry at the St. Louis Exposition in 1904. The winery’s production ranked second in the county, at 200,000 gallons, surpassed only by Martinelli’s Mt. Diablo Winery.

The winery building is a 50’ x 66’, three story stone and wood structure set into a hillside. The bottom two floors of the 10,000 square foot building are made of two-foot thick limestone from Joshua Marsh’s quarry on the north side of Mt. Diablo, and the third floor hillside level is of wood. The date “1885” is chisled on three inner walls of the winery. Also, the name “P. De Martini” and a silhouette of a man’s face with initials “P.D.M.” next to it are carved on inner walls of the second floor.

The De Martini winery operations were among those that fell to the grape blight and the prohibition era, and the vineyards were replaced with an almond orchard. In November 1940 the De Martini winery was sold to candy manufacturer, George Cardinet Sr. The Cardinets converted the top floor into an apartment for a weekend retreat and storage facility. Purchased by George Forni and his wife in 1962, it was used as a private dwelling until 1979. After that, it sat vacant and was often vandalized. The family had plans to develop the property, and on August 30, 1984 the De Martini Winery/Forni Ranch was placed on the National Register of Historic Places. In 1988, the Clayton City Council voted to spend $900,000.00 to purchase the 104 year old De Martini Winery and eight acres surrounding it. 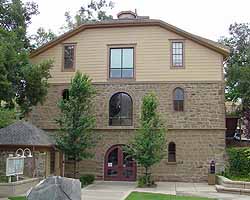 DeMartini Winery restored as the Clayton City Hall & Police Station (2000)
Using redevelopment funds, the $3 million renovation project transformed the abandoned winery into a civic center, with a community meeting room, city offices and the Clayton Police Department. Much of the original building is intact – “the old beams, stone walls and wood floors are still the same.” Carvings on the wall in the conference rooms were saved – “1885”, the date the winery opened, and the winery’s name. The new Clayton City Hall opened to the public on August 30, 1997.