The Methodist Church built what is now Endeavor Hall in the 1860s on land probably donated by Joel Clayton. (Joel’s wife, Margaret, was a member of the Methodist Church.) The church was built of wood with a rock foundation. In the early years, circuit riding preachers linked the small rural community of Clayton with Martinez, Antioch and the coal mining town of Somersville. 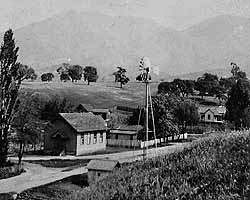 School Program (1902)
The Christian Endeavor Society made it truly a social hall. In 1932, volunteer trustees continued to maintain it so that it could serve the community. The volunteers added a stage and a kitchen—and eventually the outhouse in back became obsolete as indoor toilets we added. Over the years Endeavor Hall was the meeting place for weddings, funerals, potlucks, school plays, dances, political elections, 4-H Club, the Red Cross, dance lessons, and dog training. 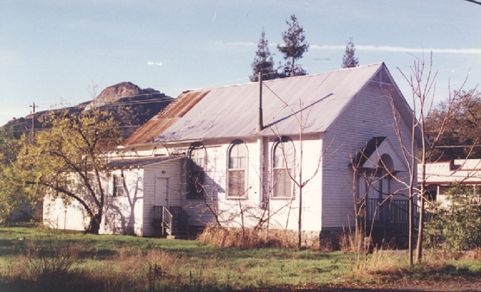 Endeavor Hall just prior to renovation (1997)
With the passage of the Americans with Disabilities Act in 1990, Endeavor Hall was required to be accessible to the handicapped. The three entrances to the building were up stairs. Once in the building, the toilets were upstairs on the stage level. With little money in the coffers to comply with the access laws, the volunteers deeded the property to the City of Clayton. It is a common misconception that the building was unsafe after the 1989 Loma Prieta earthquake. Christine Duncan Lambert was teaching a ballet class during the earthquake and says that the old building rocked and rolled but withstood the earthquake quite nicely. 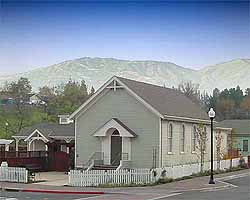 Endeavor Hall after restoration in 2001
The City of Clayton continued to use Endeavor Hall for council and planning commission meetings until the Clayton Community Library was built in 1995. The Endeavor Hall Rehabilitation Project, which restored the building, exemplifies the power of common purpose in a community proud of its heritage. Restoration was completed in 2001 with a ceremony that included honoring the former volunteer trustees who were Martin Easton, Marie Frank Larson, George Frank and Charmetta Mann.