Skip to content
The property known as the Keller Ranch is thought to have been the principal village site of the Chupcan or Volvon people who occupied the areas around Mt. Diablo dating back three to four thousand years. The land currently occupied by the Keller house may have been a part of Rancho Del Diablo, a Mexican land grant. It was subsequently owned by Joel Clayton.
Vincent Liberty was a rancher and operated a “road house” on the Fairfax-Bolinas road. Vincent Liberty left his wife in Marin County in 1891. His 24 year old daughter, Elodia, chose to live with him and his son remained in Marin County with his wife, Mary Jane Liberty. Liberty leased the ranch on the Clayton property and he and Elodia lived in the house that is now the Clayton Museum.

Keller House and Barn (1915)
In 1897, Elodia married Charles Henry “Harry” Keller, a man whom she had met in the course of his making deliveries from his butcher shop in Concord. The Kellers built a house on Galindo Street in Concord to and lived there. (It is now a Concord historical house.) Charles Henry was eight years Elodia’s junior.

The 1900 census shows 63 year old Vincent Liberty living on a rented farm on the Clayton estate, his occupation “farmer”. His marital status was “married”. Living with him were two servants, Julia Holdway, age 40, a widow and Henry Frank. At the time of Liberty’s death in 1923 he was married to Julia Holdway, Mary Jane having died in 1919.

Harry and Elodia Liberty Keller purchased the property in 1910 from the Estate of Joel Clayton. Voter registration records show that his occupation changed from “butcher” to “rancher” between 1910 and 1912. It is said that the Kellers camped under a huge oak tree on the si

te while the house was being built.

The Keller house, named Casa del Sierra, “has been locally identified as a rare surviving building of this period and a fine example of custom home building of the early twentieth century.” It is of the Mission Style with Craftsman elements. Magnificent gardens and a fish pond surrounded the home, tended by Elodia. The property had large barns and cattle yards.

Harry Keller operated the ranch until his death at the end of 1940. From 1940 until her death in 1954 Elodia Liberty Keller retained a life estate of the property but it was leased it to Bob Flackus. From the early1960s until 1972, trustees of the Keller estate leased the property to Manuel DeJesus who continued ranch operations.

In 1972 the property was sold to Pacific Coast Construction Company. An economic downturn and resistance from the Native Americans prevented its development. Seeno Construction Company bought the property in 1978. Wanting higher development standards and more protection of natural terrain, the voters rejected Seeno’s proposal in 1983. In 1987 Prestley Homes bought it. In 1991, the City of Clayton acquired a small parcel holding the Keller house and the property on which the Clayton Library sits. 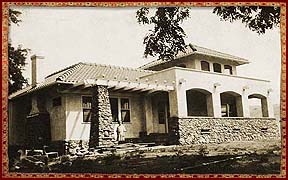