Joel Clayton founded the town of Clayton in 1857, expecting it to become a center for mining activities around Mt. Diablo. He soon began to establish services that a town would need.

In addition to a store, and a church that became known as Endeavor Hall, Joel provided

two acres along Pine Hollow Road for a “PUBLIC SCHOOL”. The deed of sale was for one dollar, between Joel Clayton and the County and State, with the town blacksmith Shadrach Jones and A. A. Fisher as trustees.

At that time Pine Hollow Road continued straight, to the edge of the hill overlooking the town. Clayton’s Main Street lines up with it perfectly, but the old wagon road had to turn south, going downhill and across Mitchell Creek, to reach it. It is a pathway now. 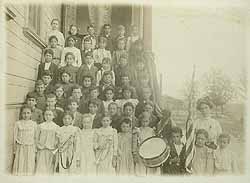 Mt. Diablo School opened in 1863. It was a two-room wooden building that faced north. From the monument that was dedicated on October 21, 1995, it would have been directly west about in the middle of today’s playfield.

Students came on horses, in wagons, or on foot … sometimes barefoot. Wood stoves warmed the rooms, and in really bad weather, school was sometimes discontinued. Children improvised much of their play equipment. Children were often excused to help their families with farming duties. 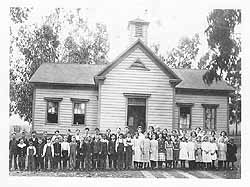 By 1890, at the height of Clayton’s mining and agriculture prosperity, the school’s enrollment was 111, with two teachers who earned $150.00 each. The school never had more than two teachers, or a principal and one teacher, at any one time. When the school finally closed after 84 years in 1947, there were only 13 students. Mt. Diablo and Morgan Territory Schools closed in 1947, after state regulations made them obsolete. Clayton students were bussed to school in Concord until the new Mt. Diablo Elementary School opened in 1955. The original two-acre school was expanded with acquisition of almond orchard land from George Cardinet, Sr., and the new Mt. Diablo Elementary School was opened as part of the newly created Mt. Diablo Unified School District.

Lucy Correa Viera, born in 1902, attended Mt. Diablo School from 1907 until 1914. She walked 2 ½ miles to school when she was five years old. She remembered a “big schoolhouse”, painted tan with brown trim, with heavy sliding doors between two classrooms and an entry anteroom where coats and lunch pails were kept. A rope hung from the bell tower. Wood stoves centered each classroom. Toilets were “way out in the field.” Other out buildings were a wood and storage shed, washroom, and horse barn. Most school events took place in Endeavor Hall. The east side of the yard was reserved for girls and small children, and the west for boys. After the 8:00 A.M. bell, students lined up, marched in, saluted the flag, and began their schoolwork.
On October 21, 1995, a monument was erected that marks the site of Clayton’s original two-room school. The marker was dedicated to the memory of former students, teachers, principals, and trustees, and to Joel Clayton, town founder, who gave the land for Clayton’s first “public school.” The Monument base includes stones from the original 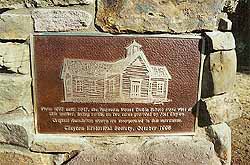 school foundation, a “grit block” from Brierley Green Farmhouse, Joel Clayton’s birthplace in Buxworth, England, and stones from several historic building in Clayton. The monument was financed by the donations of many contributors.
Clayton School

There’s a little town called Clayton where the valley reaches the hills It’s a quiet little village where the mockingbird often trills.

On a hill just west of the little town stands a school house all alone. For over eighty years it stood there like a king upon a throne.

Well, its usefulness has passed away and the pupils like swallows they have flown. Some have gone to distant lands and some have stayed at home.

I used to love to hear the bell as it rang out each morn To call the children to their seats when the days were nice and warm.

At half past eight, the first bell rang and another toiled at nine. And then the little bell would chime to call the kids in line. Two by two they’d march inside Then each would go to his or her desk and be seated with a chime.

Those were happy days for the children that played on the old school ground As they hollered and laughed and played their games, it was sure a happy sound.

Now they are going to tear that old school down and throw its boards away. To that, if I any say at all, I’d sure as the world say “Nay”.

The government should take the old schoolhouse and paint it up all clean Then put a fence around it so it always could be seen.

There let it stand as symbol or to crumble away as it will But you can never destroy the Clayton School That stood there on the hill.