When Joel Clayton founded the town that eventually was named after him, he envisioned that it would become the commercial and industrial center for the developing coal mining industry. He even planned for a plaza with the county court house to be located on Court Street. He sold house lots along Main Street to the settlers and miners who flocked to this area. A general store, several residences, the livery stable and other buildings were quickly built. 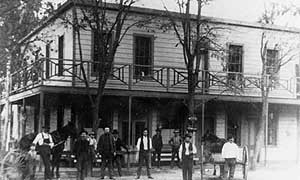 In 1857 (1858), a Frenchman named Romero Mauvais erected a house and then opened a tavern at the corner of Main and Center Streets. Many families made the hotel their home while building a permanent residence. The inn became known as the Clayton Hotel.

On February 28, 1864, disaster struck the budding town. Following an unprecedented drought in the winter of 1863-1864, most of the business district of Clayton was destroyed by fire, which began in the Clayton Hotel. Quoting from a March 5, 1864 article from the Contra Costa Gazette: “Henry Kerr, who was burned to death, was taken up to bed “drunk” by Mr. Barrow, the keeper of the Hotel. On returning to the bar room Mr. Barrow found the paper of the wall behind the bar was on fire, and hurried to the pump to get water to put it out. The fire spread; the Hotel and the adjoining buildings were all of wood, and in this dry season burned like cinder. The wind too was blowing quite fresh at the time. Thus the hotel and the butcher’s shop and the stores of Messrs. Rhine and Clayton, lying next to the hotel on the east, were speedily consumed. Very little furniture and goods were saved. The fire spread and thus suddenly and without an hour’s warning were eight houses with nearly all their contents totally consumed by fire. The total loss cannot fall short of about $15,000.00; the property was without insurance. This calamity is not without its lesson of warning to all our citizens. No one can be too careful to guard against these accidents; the provident may take warning and get their houses and stores insured” (3/5/1864 Contra Costa Gazette).

The disaster didn’t stop Clayton, however. Its businessmen were prosperous and the land was fertile. Clayton quickly rebuilt, and continued to offer important services and meet the needs of the turbulent mining area.

The second story was put on the original Clayton Hotel, adding the six rooms that became the hotel. In 1868, this historic building was advertised as the first “concrete” Fireproof Mauvais’ New Hall”. Notices were published in the June 13, 1868, Contra Costa Gazette of “A Grand, Independence Ball at Clayton, on the evening of the 3rd of July 1868.” “A fine Band of Music has been engaged from San Francisco, and every arrangement will be made to insure the pleasure and satisfaction of guests. Tickets, including supper, $4.00.” “No pleasanter or more accessible locality for a public gathering that the village of Clayton is to be found In the county, and the independence celebration there will attract a large attendance of our citizens generally.”

After Zeno Mauvais (Romero Mauvias’ son) sold the hotel to John Condie in 1875, this building became known as John Condie’s Mt. Diablo Hotel. The building served as an inn and as a stopping point for the stage that ran from Stockton to the Bay Area.

In 1901, Antonio Nepolitano was the owner of the Mt. Diablo (Diablo) Hotel. After the original rock and mortar rear wall collapsed during an earthquake in June of 1901, it was replaced with a wooden frame construction; the other walls were protected from a like fate by timber reinforcing. Eventually the sign “Parlor” was removed from the front sitting room, and replaced by another sign that read “Post Office.” 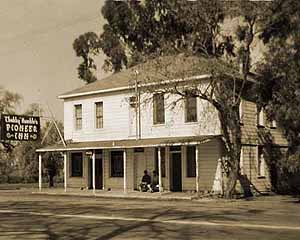 “Chubby” Humble’s Pioneer Inn (1946)
In 1946, Susan and Randall (Chubby) Humble purchased the restaurant/hotel that had become known as Tat’s Place, and renamed it the Pioneer Inn. It became known through out the region as a fine steak house, famous for fine food and celebrity diners. The kitchen was remodeled and a barbeque and copper hood made in 1950. In 1956, fire struck again. The second story was burned; customers saved all of the animal heads that had become a unique part of the Pioneer Inns’ décor. The building was gutted, and the first floor was repaired and rebuilt, carefully saving a part of one of the old walls. A large dining room was added on the east side. Thick windowsills in the smaller dining room evidence some of the 1864 rock construction. The small dining room in back of the bar was the location of the 1940s post office. 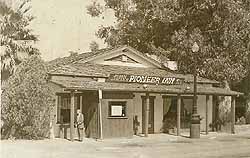 John and Anita Jawad purchased the Pioneer Inn from Chubby Humble in 1964, and they continued to operate the famous steak house until ill health forced them to close the restaurant in the early 1990s.

In January 2002, the Clayton Community Church purchased the building to be used as church offices.