The Growler is comprised of two buildings built in the late 1800s that were moved back from Main Street and joined to become a restaurant.

Jack Duncan built the building on the left (west) side in the 1870s as a home, possibly for his sister. In 1898, Judge Gus Goethals purchased the property. His brother Jack operated a barbershop in this house. In 1909-1910, Mr. and Mrs. LeClaire purchased the building; somewhere between 1908 and 1910 a façade was added and the building became a store. Mr. LeClaire probably installed the Shell gas pump that can be seen in early photographs. During the early days of automobile travel the LeClaires operated a roadside stand selling gasoline, candy, soft drinks, etc. According to Clayton pioneer, George Frank, Mrs. LeClaire also ran a post office, he thinks in the adjacent building. George also remembered that the LeClaires were horse traders and kept corrals on a Center Street property. He remembered seeing many, many horses there for sale and trade.

Later, the 950 square foot, wood-frame structure housed a saloon known as “The Growler.” A “growler” is a slang expression referring to a pail or can to carry out beer bought at a saloon, etc.; also, a keg of beer, equal to 1/8 barrel.

In the 1900s, Judge Gus Goethals built the adjacent structure on the right (east) side. The building served as a real estate and insurance office, where patrons could “bank” valuables in his safe. 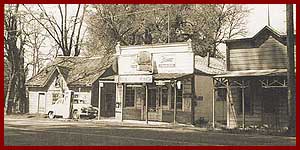 In the 1970s, Joe L. and Marie Pastor and their friends, Mr. and Mrs. Edward G. Minadeo, entered a partnership; they purchased the white wood-frame building that had been moved back from the street with the intent of restoring the town landmark known as the Growler. Their plan was to leave the Growler’s façade intact and retain much of the original look. After about $30,00.00 worth of materials and labor restoring the structure, the Growler Tavern opened in 1973. They “tried to retain as much of the old as they could.” The building’s archway and bar were original, the cash register an antique, the Knotty Pine-paneling came from the old saloon and the other paneling in the rooms came from an old barn that was torn down. The grand opening was February 24, 25, 1973; dinners were ½ price, wine or beer 25 cents. The Growler Tavern was open Tuesday through Sunday, 11 a.m. to 11 p.m., and featured a variety of sandwiches and a homemade entrée of the day. 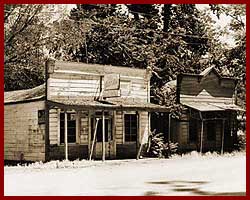 The Pastors and Minadeos also purchased the adjacent green building that had been Judge Gus Goethals’ real estate office. They had no immediate plans for the adjacent building, perhaps turning it into a store after the opening of the Growler Tavern.

The Pastors and Minadeos later sold the building to Joseph and Marjorie Salas, who had created six intimate restaurants in the East bay. Before retiring, they converted what had been The Growler and the adjacent building into what later became known as La Cocotte. As designed by Marjorie Salas, the restaurant had two major dining areas, a reception room and bar, and three smaller dining coves. Each room was distinct from the other because of the décor. Some of the features of the early dwellings were retained.

In 1976, Rudy and Ingrid Hempell purchased La Cocotte, and developed it into a cozy French café that has become a Clayton landmark, known throughout the bay area for its fine meals.

La Cocotte  (2002)
After 2002, the building housed The Fox & The Fiddle was operated by the Johnstons and then briefly became the Elysium restaurant. In May 2007, Ed and Stephanie Moresi — owners of Ed’s Mudville Grill— opened Moresi’s Chophouse in this location to continue the tradition of gourmet cuisine in this building. Moresi’s Chophouse is a charter member of the Clayton Historical Society’s elite 1857 League.